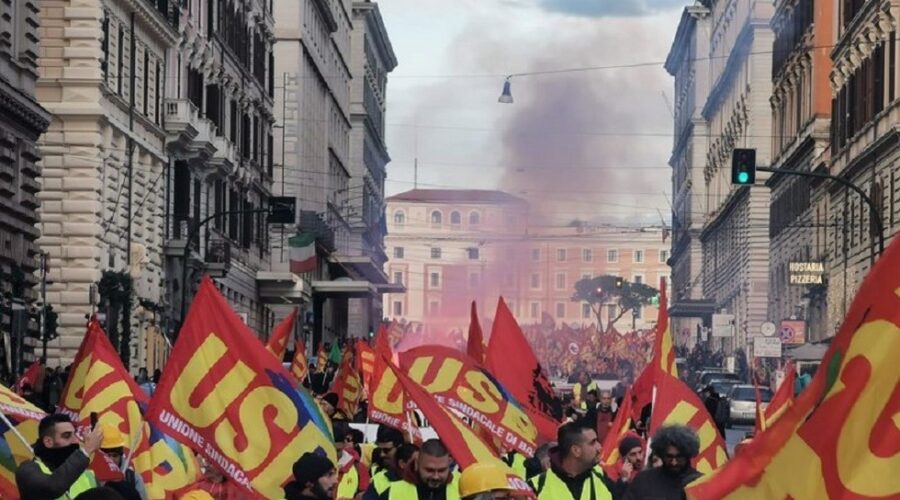 Left-wing demonstrators took to the streets in Rome on Saturday, demanding higher wages and condemning the Italian government for renewing a decree allowing it to send weapons to Ukraine until 2024.

Organized by Italy’s USB trade union and backed by a number of leftist political factions, the protest saw thousands of people assemble at the Piazza della Repubblica and march behind a banner reading “guns down, wages up.”

The protest march was organized by national trade unions. The protesters are not satisfied with the economic situation in the country. The demonstrators demand higher wages. pic.twitter.com/nIZaxv4ED4

“The Meloni government is dragging us further and further into a spiral of war with unpredictable outcomes,” the USB wrote prior to the protest. “Italy is evidently a belligerent and active country in the conflict, despite the fact that the great majority of the population is against the war and the consequent sharp increase in military spending.”

Italy’s new prime minister, Giorgia Meloni, issued a decree on Thursday allowing her cabinet to continue sending weapons to Ukraine until the end of 2023 without seeking the formal approval of parliament. Her predecessor, Mario Draghi, was a staunch supporter of Kiev and lost power after a disagreement over arms shipments split the largest party in his coalition government, the Five Star Movement.

The Italian public is split too, with 49% opposing sending weapons to Kiev and 38% in favor, according to a poll taken by EuroWeek News last month. Additionally, 49% of Italians believe that Ukraine needs to make concessions to Russia in the ongoing conflict to speed up the peace process, while only 36% want Kiev to keep fighting.

Last month, another rally in Rome calling for a peace deal to end the Ukrainian conflict drew 100,000 people, organizers said.