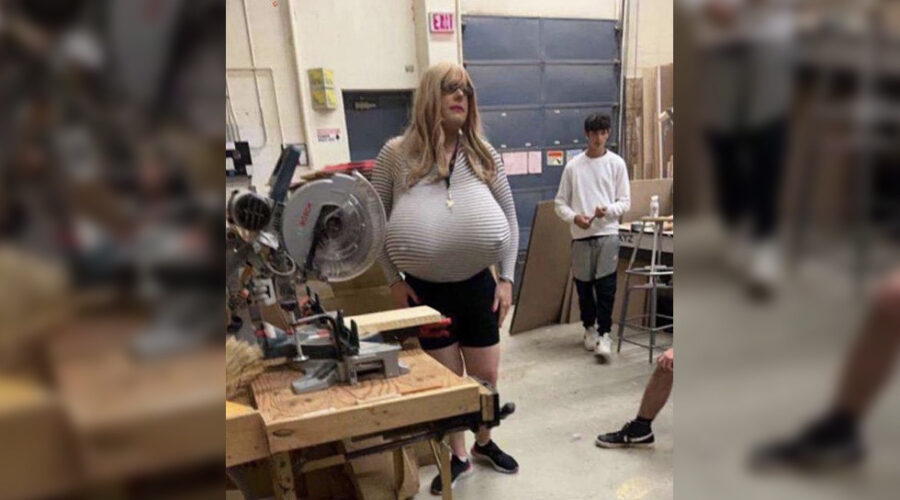 A transgender teacher in Canada has gone viral on social media after students filmed her during class, revealing her wearing oversized fake breasts under tight clothing. The school board has defended the teacher from angry parents, arguing that she is free to express her gender identity however she sees fit.

Kayla Lemieux, who identified as Steven Hanna earlier this year, is a manufacturing technology teacher at Oakville-Trafalgar High School in Ontario, Canada. After her transition surgery, she started to draw complaints from students and parents over her appearance as she wore fake synthetic breasts that almost completely cover her entire torso and abdomen.

Apparently in today's woodworking (aka weirdwoking) class at Oakville Trafalgar High School in Canada, pupils will learn how to make chapel hat pegs, a speciality of their trans teacher, Kayla Lemieux…… pic.twitter.com/o9cFoMjnUK

The Heltan district school board said that it respected Lemieux’s right to express her gender identity, and that it would not be discussing the issue any further as it was a “personal matter.”

It added that criticizing the teacher’s appearance or interfering with her “expression of her gender identity” would be a violation of the Ontario Human Rights Code.

Some parents have told the Toronto Sun that they have no problem with Lemieux coming out as a trans woman, but insisted that the teacher’s prosthetics were going “too far.” Others have pointed out that the issue is not about gender expression, but the fact that the shop teacher’s appearance is simply “unprofessional.”

The school board has now said it will develop a “safety plan” for the teacher to ensure her gender rights are protected and that she can continue working with children. The plan would also look to protect the teacher amid fears that protesters could show up to the school to object to the board’s decision to keep the teacher on staff.