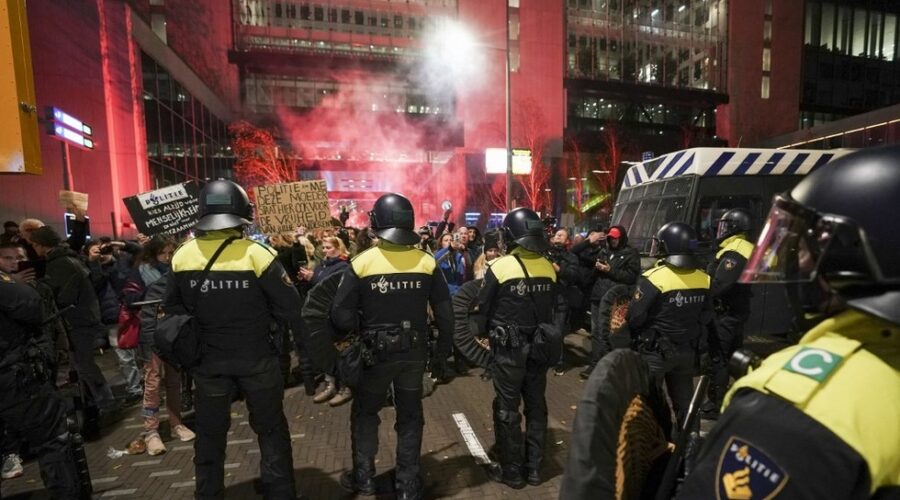 Demonstrators threw stones and set off fireworks on Friday night, whereas riot police at one level deployed a water cannon, based on footage and stories from town.

JUST IN 🚨 Protests broke out in The Hague, after Dutch PM pronounces 3-week partial lockdown in Netherlands pic.twitter.com/DRCoDGLbrV

The water cannon was deployed after protesters held a “sitdown motion” and refused to depart after a number of requests from regulation enforcement, police mentioned. After the cannon was “briefly deployed,” the group left.

Some officers have been outfitted with riot gear similar to shields and batons.

#Netherlands The Hague #protest In opposition to Covid Tyranny 12/11/2021 pic.twitter.com/F5UKTJrFIa

Police introduced a number of arrests stemming from the massive gathering, calling the scenario “stressed” at one level. Based on officers, a gaggle of protesters created a barrier and threw stones and fireworks at police. “A number of individuals” have been detained for setting off fireworks, officers mentioned. Police mentioned that they had earlier discovered a person carrying “heavy fireworks” coming into the realm.

The Hague has been the middle of a number of different Covid protests, together with one earlier this month towards measures already in place for the unvaccinated.

Rutte introduced new Covid restrictions that can final three weeks, with many of the measures starting on Saturday night. Because of a spike in circumstances, the PM mentioned that households can be restricted to 4 individuals over the age of 13, public occasions similar to sports activities matches won’t have stay crowds, social distancing is once-again suggested, and shops can be pressured to shut early.